Art Garfunkel issued a statement on Friday explaining why he gave his approval to the campaign of Bernie Sanders to use the Simon & Garfunkel song “America” in a new political ad.

In comments released through his publicist, Garfunkel said that he “never wanted to gain an influence on the public through my songs, and then use it for my politics. It’s bait and switch.”

But he also explained how the song is meant to have universal resonance, while it’s also relevant to current issues, including what is being talked about on the campaign trail. He cited xenophobia, and said, “Now I believe the monied interests have gone too far and have rigged the system.” Sanders’ campaign is focused on Wall Street and campaign finance corruption, and he has condemned remarks that Donald Trump has made about Mexicans and Muslims.

The ad was scheduled to start airing in Iowa and New Hampshire on Friday.

“I wanted my arrangement to be urgent, reaching, yearning, shining, and full of glory, full of my love for this country,” he said of the song, first recorded in 1968.

A spokesman for Paul Simon did not respond to a request for comment.

Garfunkel’s complete statement is below:

1. I never wanted to gain an influence on the public through my songs, and then use it for my politics. It’s bait and switch.

2. Xenophobia (fear of different people) is the issue of the 21st Century (said Bill Clinton to me backstage). We reach beyond nationalism — don’t I sing for ALL hearts and minds.

3. But after 9/11 I realized that I truly love my America and quest for an identity with my fellow Americans.

4. Almost 50 years ago I professed my love in a melodic suspension that soars at the end of our song, “America.”

5. I wanted my arrangement to be urgent, reaching, yearning, shining, and full of glory, full of my love for this country.

6. Who are we? 13 states in rebellion, making what kind of composite? Southern planters defending states’ rights or a beautiful unity founded on Hamilton’s respect for northern bankers.

8. Now I believe the monied interests have gone too far and have rigged the system.

9. “Perhaps if I steal from Thomas Wolfe and give him his proper due — not the ‘man in full’ but the ‘homeward angel’ — he might reappear for you. Then see him up there where the Rockies rise, his legs dangling over the ledge above Denver, eight thousand feet in the air. Before him, the plains, behind, the Pacific, stars coming out on a summer’s night, and everywhere the twilight falls on America.

To the right is Amarillo, beyond it the Astros at play, over my shoulder, Seattle, over the other beyond the Great Canyon, gas fumes and fast food mix with the smell of L.A. Hear the blues parade across the stage. Up from New Orleans into Chicago, see all the clusters of lights beyond. Follow the fashion of Rock ‘n’ Roll — St Louie to Cleveland to Philly to bond the nation’s soul with music in its cars.

And in our hearts, love of the physical entity. America. Identity in doubt. We can’t go home again, so we’re runaway vagabonds, lost in twilight, wondering what we’re about.” 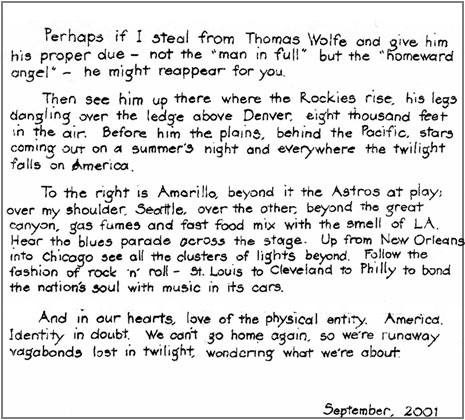